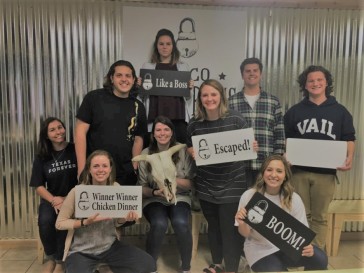 One of my favorite things to do when I am travelling, is to go to an escape room. I might enjoy it so much because I love solving puzzles! So, a couple of days ago I did an escape room with my family for my birthday. Spoiler alert: we did not escape in time. But, I thought it would be a fun idea to talk about escape rooms on my blog because it has become a common thing I do on most of my trips. I will talk about what they are, why I love them, and why you should try it out!

What is an Escape Room?

In the recent years, escape rooms have grown in popularity around the world. They are mostly located in big cities, but neighboring towns are starting to introduce them, as well. There are multiple different types of escape rooms. Some themes include: “You need to solve the mystery!”, “Can you escape a kidnapper?”, “Can you survive?”, etc. I’m not fond of scary things and horror, so I stick to the “Sherlock Homes” type of escape rooms which are the most popular.

Common themes with escape rooms is you have 60 minutes to escape and it requires more brain muscles than physical muscles. You typically don’t ever have to use force on anything in the room to solve the puzzle. Another theme is that if you use one clue, it won’t be used again. If the owners don’t tell you this upfront, I would double-check. The owners want you to have fun, so they will communicate with you from another room. They will watch what you do through video cameras and let you know if you are spending too much time on a clue, or if what you are spending a lot of time on is not important. Some rooms give you hints (usually around three) that you can ask at any time. This might be in the form of a phone, a button that you press, or just looking into the camera and asking. My advice is to save the hints for later because they probably won’t give you free hints on the last clues.

Why I love them!

I love the escape rooms because they are a fun break that make you think! Both times I have been in Paris, I did an escape room which broke up the monotony of seeing tourist attractions. However, most cities have an escape room that involves the city within the room. For example, when I was in Paris, we had to connect all the pieces to a Paris Metro map in order to escape. Another important reason I love escape rooms is it encourages bonding with the people you are alongside. You get to know everybody’s strengths and use them to accomplish a common goal. There is always a variety in the puzzles so that everyone can contribute!

Why you should try them!

There was an error retrieving images from Instagram. An attempt will be remade in a few minutes.